Mergui Archipelago: the Jewel of Burma

Discover the most exclusive diving destination in South East Asia 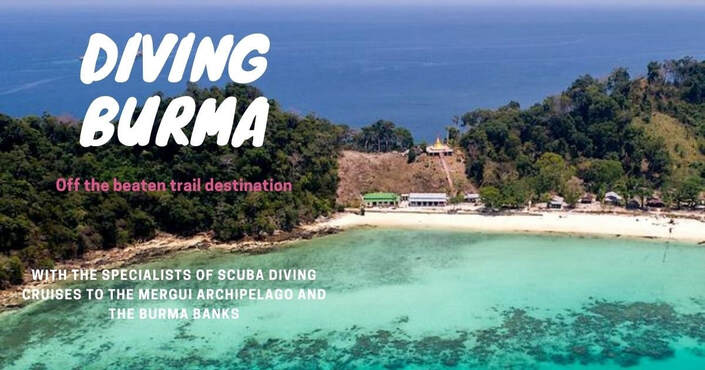 Scattered like pearls on a blue velvet bed sheet are a bunch of 800 islands scattered over the Andaman sea just off the eastern coast of Myanmar. This is Burma's tropical paradise of Mergui Archipelago. The British colonial name of "Mergui" still remains as opposed to the Burmese "Myeik".
Myanmar has got turquoise waters, palm-fringed white sand beaches, amazing dive sites, rich wildlife, mangrove forest, but despite the fact that there are only a few islands in Thailand, comparatively, Mergui Archipelago, is far less famous than its Andaman Sea neighbor, the surin and similan islands.
In fact, Myeik Archipelago is one of the world’s best-kept secrets due to the fact that it was only opened to tourism in 1997 and is still under quite a strict regulation.

The Moken: sea gypsies inhabitants of the Mergui Archipelago

Still pretty unknown to the world, the Moken are a shy, peace-loving tribe also known as the "Sea-Gypsies". These people numbering just under 3000 are the indigenous people of the Mergui Archipelago. They have been sustaining themselves of the land and sea in the same manner as they have done for centuries. They are expert natural divers even if they have never heard of decompression tables...
Few people have the sense of the sea as the Moken do. In 2004, the Moken read the sea correctly just before the deadly Indian Ocean tsunami swept in. They headed for higher ground and hardly any of them were killed when elsewhere the monster wave took over a hundred thousand lives.
Most of them still live on their boat and continue to roam around the archipelago but some have established themselves in a village on Lampi island.

​Lampi island is the most well-known island in the Mergui Archipelago, it offers spectacular scenery and a rich wildlife. The Lampi island is now a designated National Park of Myanmar, the only protected area in Mergui Archipelago so far. The dense forests of its interiors are the habitats of various types of Horn bill, Kingfisher, Heron, White Breasted Sea Eagle and the Pacific Reef Egret.

West Peak Wa-ale Kyunn Lampi Island Mergui Archipelago
The common feature of most of the islands of the Archipelago are pristine white beaches skirting the heavily forested interiors untouched by human habitation.
​Spread over the water beds beneath are a kind of sea grass that serve as a favorite food of the Dugong, a medium sized mammal not very unlike the whale. There are also two rivers of the west coast of Lampi island that are navigable only during high tides and awesome for exploring the mangrove forest. Because it is mangrove area, is is rich in marine life but the visibility isn’t great so we are not often going there for diving cruise and have nicer divesites further away from the coast, where the visibility can reach 40 meters.

The clear waters are a dream for divers and snorkelers wanting to get a feel of the diverse marine life below.
The Myanmar Government is slowly waking up to the immense possibilities the Mergui Archipelago holds out as a tourist goldmine and as an alternative to the over-exploited holiday destination of Phuket in neighboring Thailand.
Situated in the southern-most tip of Myanmar is the port town of Kawthaung. A 40 km Andaman Sea boat ride to North-West of Kawthaung will take one to the island of 115, a very popular destination for tourists visiting the Mergui Archipelago. On one side of the island you can find the bird nest cave, where thousands of birds are making their nests and on the other side you can find the dive site we call Volcano home to many seahorses and black tip reef sharks. The area is finally a place protected by some marine conservation projects.
You'll find below a quick overview of our favorite dives sites in Mergui Archipelago. If you want a more complete description, we have one here: Myanmar's best dives sites. If you want to read about the wonderful marine life we have here, head over here: Myanmar Marine Life.

Western Rocky is one of Mergui archipelago’s southernmost dive sites and perhaps one of its most exciting in terms of the breadth of diving on offer. Western Rocky itself is a small island, sporting a diveable passage right...

Few live-aboards make it to the northern extreme of the Mergui Archipelago region, but those that do are in for a delight. Tower Rock features breath-taking topography with walls studded with corals and fans providing shelter for spiny lobsters, banded shrimps, oysters and clams, while manta rays and schools of modulas glide silently past the impressive backdrop.
Read more about  Mergui Archipelago's best dive sites

Until the ’90s the Burma banks were only known to some fishermen and boat captains but their exact location remained undocumented. Pioneering scuba divers at this time couldn’t quell their curiosity and began visiting these sites more regularly. Before then, tourism was not widely practiced in Myanmar but with the surrounding countries becoming more and more trodden by foreign visitors, it became an increasingly popular destination for those seeking an exclusive diving experience.
Read more about the Burma Banks 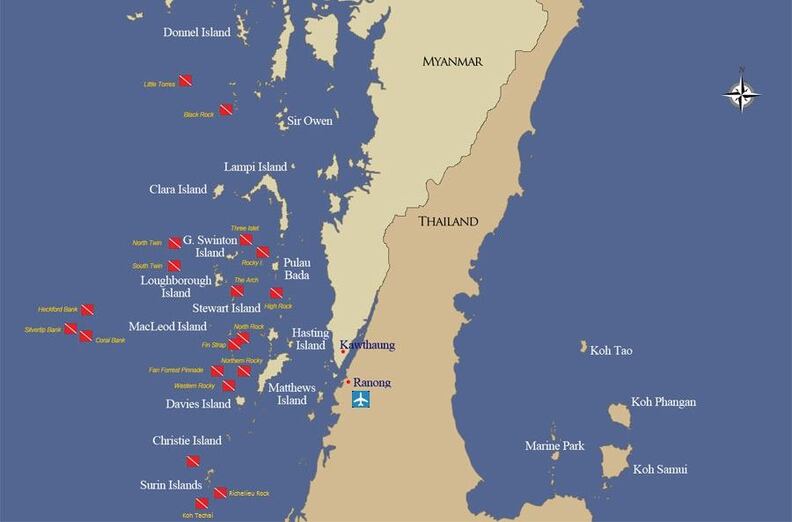 If you are up for discover new dive sites, enjoy the diversity of the undersea life... that's what we offer you with our Myanmar archipelago liveaboards!
Mergui Archipelago trips dates
//"facebook cookie"